During the 1985 St. Clair Solo, past President Larry Rotta found himself face to face with a situation that few of us will ever encounter – switching from a racer to a rescuer. Tragedy was averted by the narrowest of margins that day, and serves as a stark reminder of what can happen, even during conditions that are pretty benign. When the Eilberg Award was established in 1987, Larry became the first recipient. Larry recounts the details of that early fall afternoon below.

I’d forgotten the year even but the incident took place during the St. Clair Solo. I remember a bright fall day with light breezes and as typical with my heavy winded Folkboat I was tailending the fleet. I may even have had a late start and at one point was talking on the radio with Jim Douglas about dropping out. It was his opinion I should stick it out and as there wasn’t anything going on I told him I’d hang in a while longer. Maybe two hours or so later I spotted a boat ahead and below my line heading south and with its sails incorrectly set. Very soon I sensed something wrong and altered course to draw up astern. From my approaching direction there was no sailor visible and I eventually recognized it as one of our boats, a J 24 sailed by someone from the GPSC. At this point I was afraid of the worst as it was obvious the boat was not being sailed. Shortly I crossed his stern about 100′ away and then saw a sailor in the water attached to his boat on the port side amidships waving to me for help. I closed the distance under power, cleated the stern of my boat to the stern of his boat to act as a sea anchor of sorts, jumped to his boat to find him tangled in his spinnaker gear,exhausted from efforts to rescue himself and clearly experiencing hypothermia. I freed him from his gear –he had gone over in the act of rigging his spinnaker after rounding the Thames mark, probably a good mile or so from where I found him- worked him around to the stern of his boat, grabbed his belt and hoisted him aboard. I told him to take off his clothes as he was shivering rather seriously and then went forward to drop his sails. Fortunately I looked back in time to see him in the process of beginning to cast my boat adrift. The rest is history– got him warm clothes, blankets and hot chocolate and towed him back across the lake. It all makes a good sea story when I’m teaching my sailing cadets at New Bern High School Navy Jr.ROTC the dangers and symptoms of hypothermia. We never knew how long he was in the water or the water temp. But I estimate about an hour in water in low to mid 60’s.

One of my strongest recollections of that day is that if it weren’t for Jim Douglas I probably would have quit the race earlier and headed for the barn and there weren’t many other people on the water! 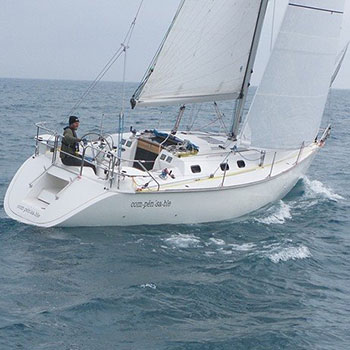 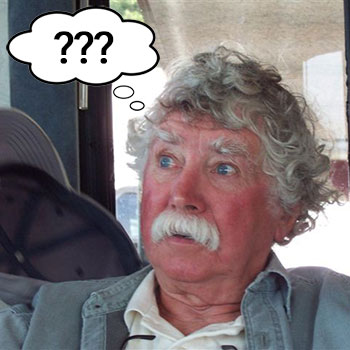 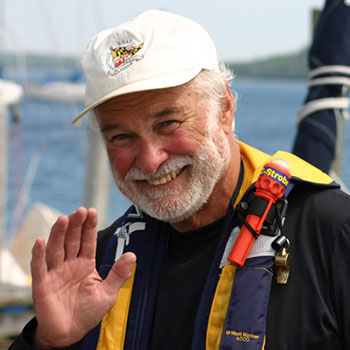